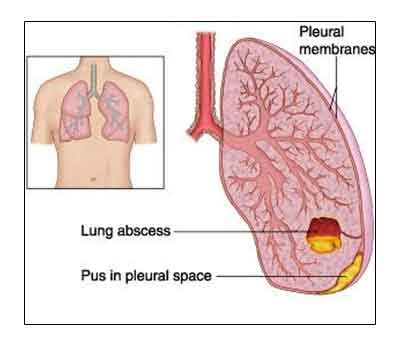 What is Lung Abscess?

This is pulmonary parenchymal necrosis and cavitation resulting from infection.

What is the pathology of Lung Abscess?

Cavities contain necrotic debris or fluid caused my microbial infection. Development of lung abscess implies high microbial burden and inadequate microbial clearance as a result the damaged tissue is walled off by the immune system and becomes an abscess. Usually the abscess develops because the original infection was not completely treated.

What is the etiology of Lung Abscess?

Most lung abscesses develop after aspiration of oral secretions by patients with gingivitis or poor oral hygiene. A bacterial inoculum from the gingival crevice reaches the lower airways and infection is initiated because the bacteria are not cleared by the patient’s host defense mechanism. This results in aspiration pneumonitis and progression to tissue necrosis 7-14 days later, resulting in formation of lung abscess. The causative microbes include:

Typically, patients have altered consciousness as a result of alcohol intoxication, illicit drugs, anaesthesia, sedatives, or opioids. Those who misuse alcohol often experience bouts of vomiting and altered levels of consciousness. These conditions increase the likelihood of inhaling stomach contents and bacteria into the lungs, which can cause an infection. With altered consciousness there is less likeliness of the patient to voluntarily cough to clear aspirated substances. People who misuse alcohol often have weakened immune systems due to poor overall health and nutrition, which also makes it easier to develop an infection.

Older patients and those unable to handle their oral secretions, often because of neurologic disease, are also at risk. Lung abscesses can also develop secondary to endobronchial obstruction (eg, due to bronchial carcinoma) or to immunosuppression (eg, due to HIV/AIDS or after transplantation and use of immunosuppressive drugs). A less common cause of lung abscess is necrotizing pneumonia that may develop from hematogenous seeding of the lungs due to suppurative thromboembolism (eg, septic embolism due to IV drug use) or right-sided endocarditis. In contrast to aspiration and obstruction, these conditions typically cause multiple rather than isolated lung abscesses.

How is Lung Abscess classified?

According to the duration:

 Acute (less than 6 weeks); Acute lung abscess is usually circumscribed with not so well-defined surrounding to lung parenchyma, fulfilled with thick necrotic detritus. Histologically, in central parts of abscess there are necrotic tissue mixed with necrotic granulocytes and bacteria. Around this area there are preserved neutrophillic granulocytes with dilated blood vessels and inflammatory oedema

 Chronic (more than 6 weeks); Chronic lung abscess is usually irregular star-like shape with well-defined surrounding to lung parenchyma, fulfilled with grayish line or thick detritus. In the centre of abscess is located pus wit or without bacteria. Around abscess is located pyogenic membrane through which white blood cells are migrating to abscess cavitation. Around pyogenic membrane lymphocytes, plasma cells and histiocytes are placed in connective tissue

What are the Symptoms of Lung Abscess?

Signs of lung abscess, when present, are nonspecific and resemble those of pneumonia

Symptoms of abscess due to anaerobic bacteria or mixed anaerobic and aerobic bacteria are usually chronic (eg, occurring over weeks or months) and include productive cough, fever, night sweats, and weight loss. Patients may also present with hemoptysis and pleuritic chest pain. Sputum may be purulent or blood-streaked and classically smells or tastes foul.

Symptoms of abscess due to aerobic bacteria develop more acutely and resemble bacterial pneumonia. Abscesses due to organisms other than anaerobes (eg, Mycobacteria, Nocardia) lack putrid respiratory secretions and may be more likely to occur in nondependent lung regions.

How can a nurse physically Examine for Lung Abscess?

Inspection: patient is very intoxicated. Clubbing may be seen. The damaged chest half is delaying in respiration. poor dentition. evidence of gingivitis and/or periodontal disease. Foul-smelling sputum.

Palpation: cavities decreases fremitus. When the cavity is empty the vocal fremitus should be decreased, but if the cavity is close enough to the surface, it will be more pronounced. 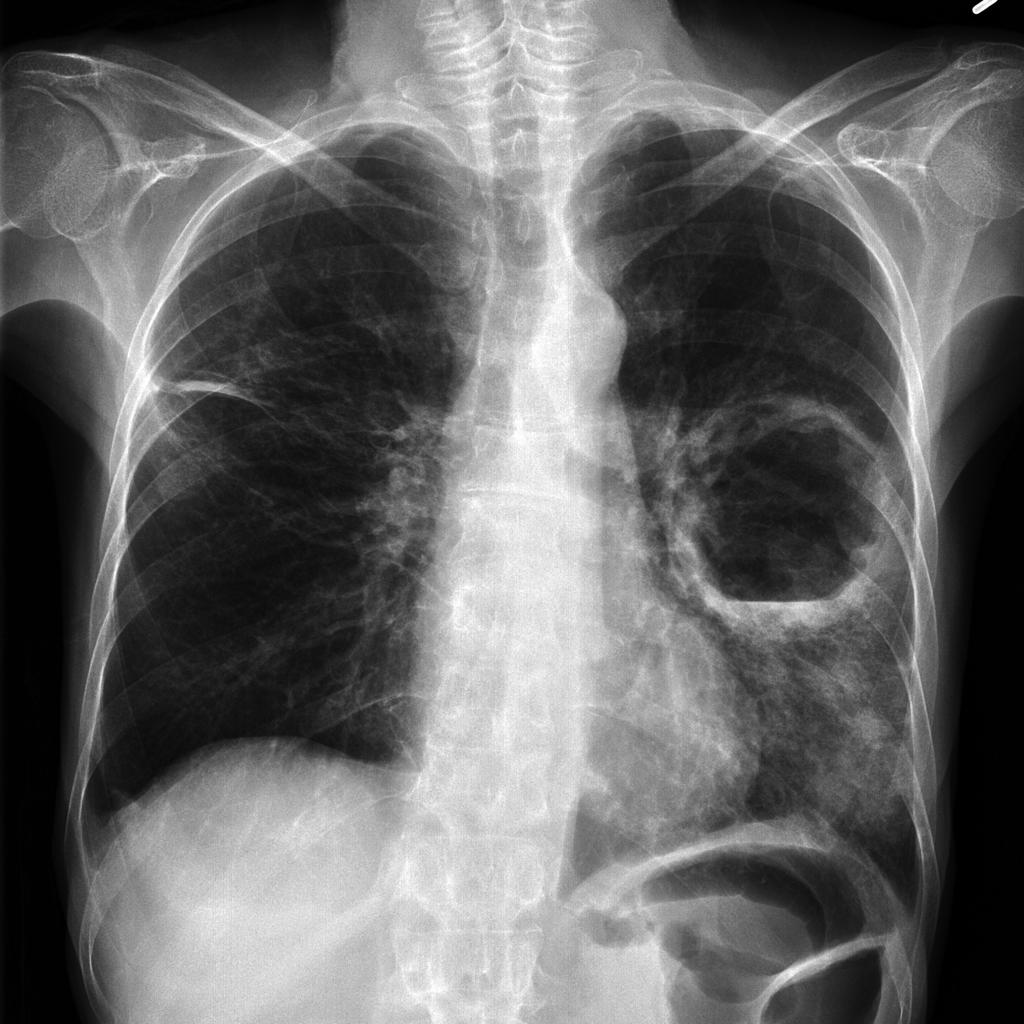 How can I diagnose for Lung Abscess?

Chest x-ray: 1 or 2 wall thickened cavities in dependent areas of the lungs (lower lobes). Air-fluid shadows can be seen, which is indicative of a partially emptied cavity.

 A full blood count will show increased white cells. Platelets, ESR and CRP will be raised.
 Blood and sputum cultures should be performed to help isolate the organism.
 Bronchoscopy as needed to exclude cancer, detect unusual pathogens such as fungi or mycobacteria, and in immunocompromised patients

 Culture of any pleural fluid Bronchial carcinoma can lead to obstruction that causes pneumonia and abscess formation. Bronchial carcinoma should be suspected in patients who do not respond to antimicrobial treatment or have atypical findings such as a cavitary lesion and no fever.

What does the differential diagnosis of Lung Abscess include?

What are the complications of Lung Abscess?

Complications of pulmonary abscess include the following:

 Rupture into pleural space causing empyema
 Pleural fibrosis
 Trapped lung
 Respiratory failure
 Bronchopleural fistula. This is when a connection develops between a large airway inside your lung and the space in the lining around the outside of your lung. It’s corrected through a scope or surgery. Haemorrhage Septic emboli
 Amyloidosis 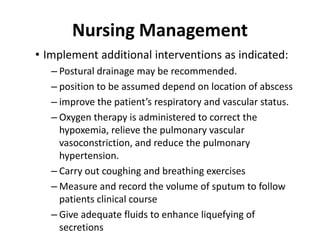  V antibiotics or, for less seriously affected patients, oral antibiotics
 Percutaneous or surgical drainage of any abscess that does not respond to antibiotics or of any empyema Treatment is with antibiotics. Clindamycin 600 mg IV q 6 to 8 h is usually the drug of choice because it has excellent activity against streptococci and anaerobic organisms. The primary alternative is a combination β-lactam/lactamase inhibitor (eg, ampicillin/sulbactam 1 to 2 g IV q 6 h).

Optimal duration of treatment is unknown, but common practice is to treat until the chest x-ray shows complete resolution or a small, stable, residual scar, which generally takes 3 to 6 wk or longer. In general, the larger the abscess, the longer it will take for x-rays to show resolution.

An accompanying empyema must be drained.

Surgical removal or drainage of lung abscesses is necessary in the roughly 10% of patients in whom lesions do not respond to antibiotics, and those who develop pulmonary gangrene. When surgery is necessary, lobectomy is the most common procedure; segmental resection may suffice for small lesions.

Necrosis of lung tissue with no clear delimitation. Often a complication of severe lung infarction.

What are the symptoms of Lung Gangrene?

How can a nurse physically examine for Lung Gangrene?

How can you diagnose Lung Gangrene?

Analysis of sputum: the colour is dirty gray. When settling, three layers are formed. Upper layer is liquid, frothy and whitish. Middle layer is serous. Lower layer consists of purulent detritus and debris of pulmonary tissue. Elastic fibres can be seen, and many neutrophils.

What treatment options are available for Lung Gangrene?

What is the difference between Lung Abscess and Lung Gangrene?

In both situations, lung abscess and gangrene, there is necrosis, however there are differences.

 Lung abscess has a pyogenius membrane which is not present in gangrene of the lung.
 Sputum in lung abscess is whitish-yellow, mucopurulent, no odour and contains pyogenic organisms.
 Sputum in gangrene is foul smelling, grey in colour, contains characteristic oral spirochetes, fusiform bacilli and vibrios aspirated from the oral cavity.

To access the case study on Lung Abscess, visit https://www.slideshare.net/education4227/case-presentation-on-lung-abscess